A Short History of Human Error 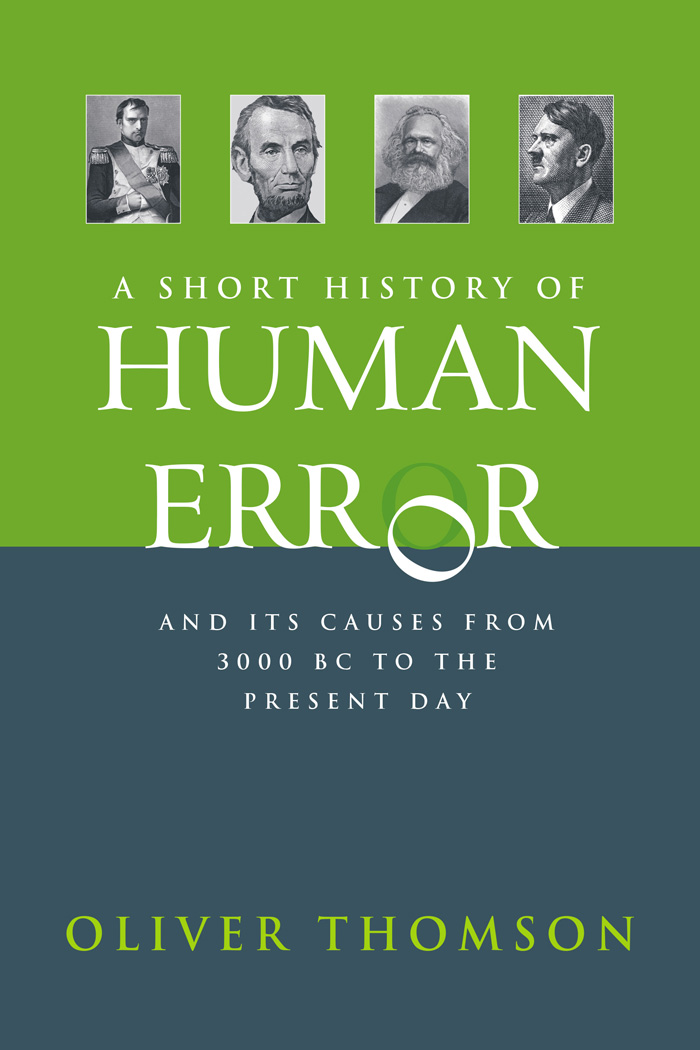 About The Author
Oliver Thomson is the author of ten books on historical subjects, also several guide books and a play. Having won a scholarship in Classics to Trinity College Cambridge he changed tack to read history and later gained a PhD at Glasgow University on propaganda history. He spent some 25 years as managing director of two advertising agencies but also continued writing, lecturing and broadcasting on radio. The primary aim of this book is to use modern psychological criteria to examine the personality flaws of political, religious and economic leaders over the last three millennia and relate them to the many man-made disasters for which they were responsible.

About The Book
This is a candid, sometimes controversial study of the psychological or other flaws of political, religious and economic leaders from ancient times to the present day: from Rameses II to Colonel Gaddafi, from Genghis Khan to Stalin and Hitler, from Buddha or Saint Paul to Martin Luther or Ron Hubbard, from bipolar, insecure, asthmatic or sex-addicted presidents to alcoholic prime ministers, mad kings, obese emperors and kleptomaniac dictators. Amongst their followers we find psychopathic police chiefs, gay generals, crazed philosophers, epileptic prophets and ludomaniac business- men. We look at how the minor personality disorders and health problems of the few have led frequently to considerable misery for the many.
Without slavish adherence to the latest psychiatric fashions the author uses at least some of these concepts to help analyse the anti-social behaviour traits of leaders past and present and to assess the degree to which their mental or physical state contributed to most of the world’s worst man-made disasters: wars, genocides, famines, persecutions, enslavements and recessions.
We consider the questions: How many millions died because the Archangel Gabriel supposedly appeared to both the Virgin Mary and Mohammed? How many millions died because Napoleon was bullied at school, because Hitler failed to get into the Vienna Academy, because Stalin had an alcoholic father or because Mao suffered from attention deficit hyperactivity disorder?

‘ It is not fair that the lives of millions depend on the judgement of a man whose mind is warped by arteriosclerosis.’
C.MacLaurin,1925