The Chill From Siberia 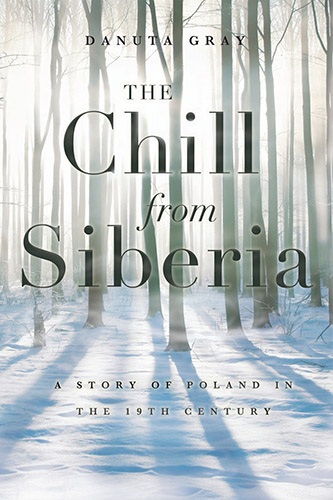 About The Author
Danuta Gray was born in Poland of Polish parents but brought up and educated in Britain from an early age. She has already had a number of short stories published in, Brummies All Write, produced by the Birmingham Museum and Art Gallery, and several others published in Nos. 5, 6 and 7 of the magazine Salvo. During her busy and interesting career she has illustrated a book entitled, Obstetrics, by Jean Hallum and slides on Iso- immunisation for Professor Denis Fairweather. All her life she had intended to write the story of her immediate forebears and their trials and tribulations in 19th century Poland, and here it is at last in her moving and descriptive novel, The Chill From Siberia.

About The Book
This is a moving tale about mid-19th century Poland, based on the experiences of the author’s forebears, during the time when her country was under the yoke of Tsarist oppression. The story is about a young noblewoman, Kamila, in the struggle to retain her inheritance, following the arrest and deportation of her parents to Siberia following their involvement in the struggle for Poland’s freedom.

The novel opens in the Eastern half of the country with the execution of
her two brothers during that year of European revolutions of 1848. With the deportation of her parents two years later – and from whom she was never to hear again – her aunt marries her off to an only surviving son, Karol, on his deathbed, to ensure that her property would not also be confiscated.

On the death of Karol from consumption, Kamila, who is still in her
teens, is obliged to take over the management of the estate, and when shortly thereafter her aunt dies also, she is left without relatives for the guidance of her life ahead.

The story then follows her trials and tribulations, including the malice of
a dismissed employee who makes an attempt on her life. She is forced to learn quickly about the ways of the world, and through the support of old and new friendships, she triumphs over adversity, and the fact-based story concludes with a happy ending. The book presents a vivid picture of provincial Poland in the 19th century, and is a gripping read for enthusiasts of the realistic-romantic genre.