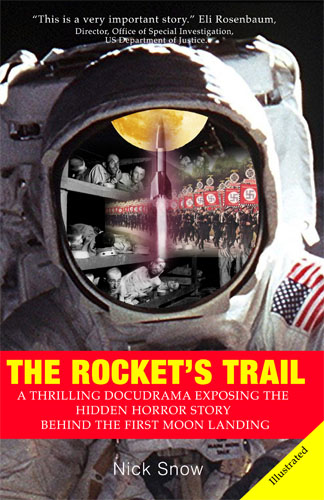 About The Author
Nick Snow is an award-winning reporter who has covered several commercial rocket launches. He now publishes business magazines and web sites for the international television industry. The Rocket’s Trail, his first novel, dramatises the hidden history behind America’s victory in the Space Race and how Cold War Warriors went to extreme lengths to cover it up. All the German and American military characters in this story are factual and placed in their correct context both chronologically and geographically. All evidence about the scientists’ wartime activities, and its cover up, is proven and resides in the archives of NASA, the US Justice Department and the FBI. The author is the grandson of one of the British scientists seconded into the Forces and sent to Germany in 1945 to find and bring back anything of value as part of the intellectual reparations programme.

About The Book
That “one small step for man” in July 1969 was made possible by a small group of Germans captured by the Americans at the end of WWII. The Rocket’s Trail is about one of these men, his direct links to crimes against humanity, and how US Cold War Warriors went to extreme lengths to cover them up.

The story is revealed through the eyes of Jim Black, an English scientist drafted in to the secret post-war intellectual reparations programme. Black’s personal ambition leads him into a deception that denies the German rocket scientists to Britain and delivers them to America. Black joins them there but when he discovers the truth about one of his new colleagues, he must choose between his new career and complicity in covering up unimaginable crimes. Can he find redemption, and what price must he pay as Washington sets about suppressing the barbaric back-story of one of their prize rocket scientists?

The Rocket’s Trail blends a fictional hero with real historical figures including Wernher von Braun, J. Edgar Hoover, Eli Rosenbaum, and Arthur Rudolph, the Director of the Saturn rocket programme and the only former Nazi eventually expelled from America.